(Part II of this column covers what you can do for trees in your yard if they are infested with piñon needle scale: https://nmsudesertblooms.blogspot.com/2019/03/pinon-needle-scale-part-2-suppressing.html)


Question: I took these photos on one of the piñon trees nearest our house. We have thousands of piñon here on our land and our neighbor’s land, some of which have died within 12-14 days of turning brown. We would hate to see an epidemic, but it does seem to be spreading. What is it and what should we do?
- Paula P., Mora, NM (submitted via NMSU Extension Agent for Mora County, Suzanne DeVos-Cole)


Answer: From the photos you shared, it looks to me like an infestation of piñon needle scale (Matsucoccus acalyptus), but I'm not an entomologist and I’m not very familiar with pest problems in your area, so I've asked NMSU Extension Entomologist, Dr. Carol Sutherland (also NMDA's State Entomologist), to weigh in on this issue with an accurate diagnosis and recommendations. I also reached out to our NM Forest Health Program Manager, Dr. John Formby, with NM State Forestry in Santa Fe. Working together with a team of skilled researchers, these dedicated experts track pest infestations and plant health all over the state, and we’re lucky to have them!

Link to US Forest Service info on PNS: https://www.fs.usda.gov/Internet/FSE_DOCUMENTS/stelprdb5343828.pdf

Both Drs. Formby and Sutherland agreed that those “little black beans” (as Dr. Sutherland calls them) are piñon needle scale (aka pinyon needle scale, aka PNS), that timing is everything for controlling the infestation, and that the time to do so is quickly approaching – emergence of these insects is dependent on warming temperatures.


As Dr. Formby pointed out, the good news is that “PNS itself rarely leads to tree death (although it can happen), but the bad news is that PNS can render the tree more susceptible to other pests, such as bark beetles. That said, if there are dead trees on the property, especially trees dying within two weeks, there may be other issues. I believe a site visit is warranted to properly identify the problem(s).”


Dr. Sutherland responded with PNS life cycle details that illustrate why timing is so important for control: “These are native insects for New Mexico and probably much of the Southwest and western U.S., wherever the host, pinyon pine (Pinus edulis), and several other related pine species grow. Like all wild animals, these pests have highs and lows in their populations from year to year, depending on a variety of variables. Drought and high temperatures are a couple that come to mind, but there are others that don’t cycle---like soil and growing conditions.


“Up in Mora, it may take another few weeks before you start to see things happening, but the life cycle of PNS is about to take a turn, and PNS in warmer parts of the state probably already have.

“Some of those black beans on the foliage now are likely empty. The male PNS emerged last fall to crawl down the twigs to branches to the trunk and beyond to the duff layer (old needles, dead weeds, rocks, etc.) where they overwintered. They will mature and molt into a minute winged ‘gnat’ with no mouthparts and long filament ‘tails’ of wax. If you’re outdoors doing spring cleanup around your trees, these will be those ultra-tiny ‘gnats’ that will get in your face, nose, ears, etc.


“Just as these males are flying in early spring, the mature female scale insects emerge from their ‘black beans,’ walking down the needles to the twigs, branches, and limbs, and sometimes to trunks, where they congregate and start producing lots of waxy ‘lint’ filaments---the ‘dryer lint’ you’ll see on the trunks of infested trees and the undersides of some limbs. Males find them there and mate. Then the males die (no mouthparts, no fat left for energy and it’s ‘curtains’ for them) as the females finish maturing their now-fertile eggs. Females lay their eggs by the zillions in the ‘dryer lint.’ The eggs hatch into even tinier nymphs, called ‘crawlers,’ which start their own journey up the trunk to the limbs to the branches to the needles where they settle on the green needles at the very ends of those you photographed. These nymphs plug their piercing-sucking mouthparts into the green growth and begin to feed on the nutritious sap of photosynthetic tissues; as they molt, they lose tiny red eyes, antennae, and legs. They also transition to that ‘bean shape,’ exuding assorted waxy-looking waste products on their surfaces. They continue to feed and mature (whether and how many more times they molt, I don’t know), but they never move again until next fall (males) or next spring (females).

“In the meantime, the needles that had hosted their parents have browned and fallen. Hard-hit trees look ‘lion-tailed’---thin tails ending in a little bush---like male African lions have. There may not be much photosynthetic green tissue left to support the tree AND the needle scales, so the tree struggles through the growing season. As this continues over time, the stage may be set for an invasion of bark beetles---Ips confuses in particular. Weak trees are beetle bait, and these beetles are tree killers.


“So, your options are rather limited. Do nothing and you could lose trees right and left. If you chose to do ‘something’ you could still lose trees, but maybe save some. Your location, ‘lay of the land,’ available equipment, and how much effort you can afford to make will come into play.”


STAY TUNED for next week's column describing what you can do to combat PNS. Until then, wherever you are, get close to the piñons near you, look for “little black beans” on the needles, “dryer lint” on the trunk and branches, and gnat-like fliers, and share photos on social media (please tag @NMDesertBlooms).


For more gardening information, including decades of archived Southwest Yard & Garden columns, visit the NMSU Extension Horticulture page (http://desertblooms.nmsu.edu/), follow us on social media (@NMDesertBlooms), or contact your County Extension office (https://aces.nmsu.edu/county).
Marisa Thompson, PhD, is the Extension Horticulture Specialist for New Mexico State University and is based at the Agricultural Science Center at Los Lunas.

Popular posts from this blog 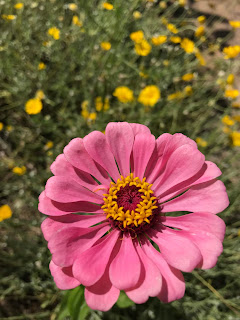 Southwest Yard & Garden by Dr. Marisa Thompson Zinnia showing off both disk and ray flowers at the NMSU Agricultural Science Center in Los Lunas. Photo credit M. Thompson     Question: I have a large monarch butterfly garden, and I gathered zinnia seed heads to plant next spring. Zinnia seeds appear to have two distinct morphologies. The ray flower seed is shield-shaped and the disk flower seed is smaller and flatter. Which of the seeds is viable? I have researched and found some who say only the ray seed, some say only the disk seed, and some say both. Please let me know which zinnia seed is most viable and why. -           Tim P., New Mexico Answer: I know exactly what you mean. I’ve had this question before myself. Zinnias were one of my first garden successes when I moved to Las Cruces in 2009. I too gathered the seed heads and I too wondered which part was the true seed that should be saved. That year I just saved the whole shebang
Read more 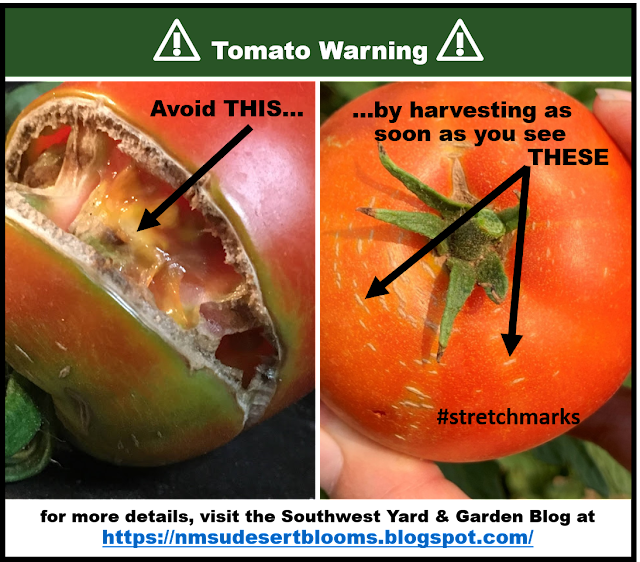 Southwest Yard & Garden by Dr. Marisa Thompson just scroll down for the details 😉 Stretch marks on tomatoes are hard to prevent, so go ahead and harvest as soon as you notice them.  Photo credit J. Kern.   Question: What’s wrong with these tomatoes? We’re seeing marks developing on some fruit in rings. The insides of the larger splits have white fuzz in them, but when the splits are first observed they do not have this fuzz. -           J. Kern, Artesia, NM , submitted via Extension Agronomist Dr. Robert Flynn Answer: Tomatoes across the state (and beyond) are exhibiting two main types of splitting: radial side splitting and concentric cracking . Both tend to be up higher on the fruit shoulder. Radial side splitting looks like someone took a knife and started cutting out a vertical wedge, but then got distracted and stopped a quarter inch or so in. Concentric cracking results in circular or semi-circular lines that start out looking like stretch marks that can break open a
Read more

Give it a Grow: Watermelon & Corn Growing Tips for NM Gardens 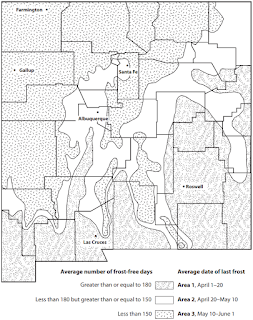 Southwest Yard & Garden by Dr. Marisa Thompson Figure  1 . New Mexico growing zones, average number of frost-free days, and average date of last frost. Adapted from Climatological Data, Annual Summary—New Mexico 1982, National Weather Service, National Oceanic and Atmospheric Administration, U.S. Department of Commerce. Question: Do you have any tips for growing watermelons and corn? -       Sally C., Albuquerque, NM Answer: The best time to plant watermelon seeds or set transplants depends on which part of the state you live in, according to the NMSU Extension Circular 457-B, “Growing Zones, Recommended Crop Varieties, and Planting and Harvesting Information for Home Vegetable Gardens in New Mexico” ( http://aces.nmsu.edu/pubs/_circulars/CR457B.pdf ). For Albuquerque and other areas with between 150 and 180 frost-free days on average (Figure 1), it is recommended to plant in May. In warmer parts of the state with more than 180 frost-free days each year, like L
Read more